In the car, Simone!

March 8 is International Women’s Rights Day. On this occasion and as a driving application (yes, cars R us), we decided to dust off the clichés about women in the car! Origin of the expression “in the car Simone”, history of women in the car, car drivers, we tell you everything!

THE EXPRESSION “IN THE CAR, SIMONE” AND ITS ORIGIN

This expression popularized by french presenter Guy Lux in the French TV program Intervilles in the 70s actually has an older origin. It actually refers to Simone Louise des Forest, one of the first french female racing drivers. In particular, she was one of the first women to obtain her driver’s license in 1929. She then took part in numerous car races from 1930 until 1957.
This driver thus gave rise to the expression, “In the Car, Simone!“ originally “In the car Simone, I’ll drive, you honk the horn!” .

WOMEN AND THE DRIVER’S LICENSE

Le permis de conduire est instauré en France en 1893 par Louis Lépine pour les candidats de plus de 21 ans et de sexe masculin. It was in 1898 that a woman obtained her driving licence, Anne De Rochechouart, the Duchess of Uzès, was the first woman to obtain the precious certificate. Two months later, she was ticketed for speeding (which probably would have deserved a small trip score on eiver)! Speeding, everything is to be put into perspective today since the authorized limit was 12 km/h in the city and 20 km/h in the countryside.

Enrolment in the driver’s licence examination, however, remained low during this period. From 1914 onwards, more and more women wanted to obtain their certificate. The year 1976 marked a turning point in automotive history, as more women than men obtained their driver’s license!

AUTOMOTIVE INVENTIONS MADE BY WOMEN 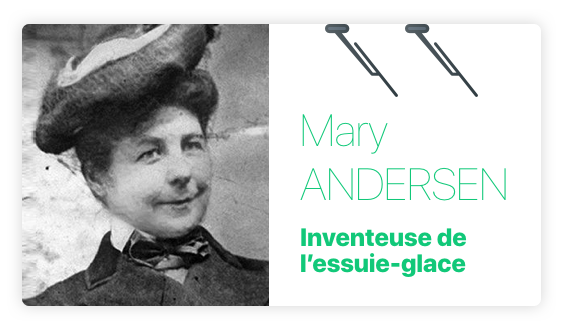 The windshield wiper was invented by Mary Andersen in 1903. It was during a trip to New York City that he got the ideato invent a lever inside the car that moved a rubber stick outside the windshield.His invention was patented for 17 years but without success. In 1922, Cadillac installed windshield wipers on all its cars. 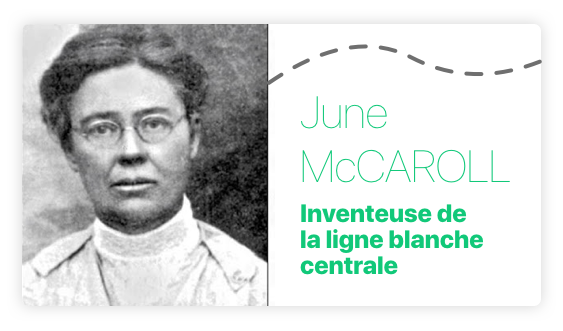 Do you know the central white (or yellow) line on the road, too? Well, a woman invented it! In 1917, June McCaroll ran off the road because of a truck. For her, the solution is simple: if there had been a white/yellow line in the middle of the road, the truck would not have overflowed into its lane and none of this would have happened! 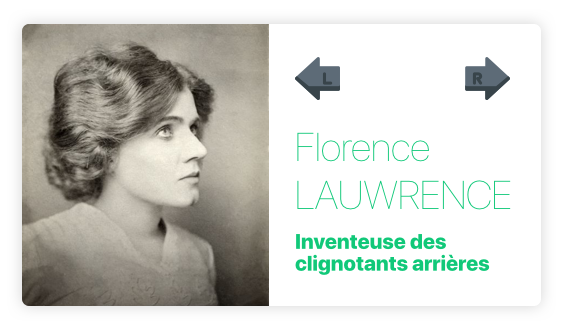 Awesome, those blinkers in the back of the car, aren’t they? Thanks are due to Florence Lauwrence who in 1917 had an “automatic signal arm” built on her car which she operated with a lever behind the steering wheel. and the blinkers are born.

Dorothy Levitt also made automotive history. She is first known to have been “the fastest woman in the world” having reached a speed of 146 kph in 1905. However, she is also remembered for being the first to recommend installing a mirror to see what’s going on behind the car… Did you recognize it? It’s the rear-view mirror!

THE PLACE OF WOMEN IN THE AUTOMOBILE

From the 20th century onwards, more and more women began to make their mark in motor sports, but some of them were particularly well known. Here are some of our favourite drivers!

Camille du Gast is the first woman to take part in a car race.

Michèle Mouton is one of the best known pilots of her generation thanks to an impressive track record. Indeed, she is known for her participation in the 24h of Le Mans where she won 1st place in the 2 Litre category. She is also known for her 4 rally victories with the famous Audi Quattro.

Lella Lombardi is one of the few women to have driven in Formula One.

As far as the automotive industry is concerned, one woman to mention is undoubtedly Sophie OPEL, who is the first woman to head a car manufacturing company.

Today, new rising figures in the automobile industry are appearing and they are women. We can mention for example Simona de Silvestro who is undoubtedly the most gifted and best known pilot of her generation. She currently participates in IndyCar and Formula E races.

The automobile world remains more masculine, but the presence of women in this environment is growing little by little. That’s good news for this sport!

In its study of alleged perpetrators of fatal accidents (APFAs), the National Interministerial Road Safety Observatory (ONISR) in Belgium shows that 80% of APFAs are male.

Selon l’étude « Gender and relation to risk: from understanding to leverage for action” led by Marie-Axelle GRANIE, men are more inclined to expose themselves to risks for the pleasure of driving, they also break the rules more easily.

According to a survey conducted by Axa Prevention in 2013, only 18% of women sometimes get behind the wheel after two glasses of alcohol compared to 34% of men.

Actually, “woman behind the wheel” is not the same as “death on behind the hill” or “accident”! On the contrary, women have greatly contributed to automotive history and continue to shine in this world today. Women are also everyday heroes: they are the ones who have the fewest accidents and are considered the “most careful”.

Let’s all be Simone and have a nice trip with eiver !

eiver improves your driving experience and rewards you for your efforts with experience points and credits convertible into discounts and benefits. eiver values each good deed you do on the road, which allows you to better control your budget, improve your driving safety and reduce your environmental impact. Take part in challenges with great prizes, compare your performance with the community and become a champion of responsible driving.